I have not been writing on the site for a while. I retired in 2015 and then achieved a Master’s degree in Creative Writing. It has taken me three years now to complete my latest novel “The Door”  This is the Prologue

Colin Jowell is a middle aged Civil Engineer. For over twenty years he has been designing concrete and calculating stress loads for construction. Once an Olympic level swimmer he still has the physique and skill.

He lives with his wife in North London, in a townhouse bought with the inheritance from the death of his father.

On his way home a door reveals itself to him and like Alice in Wonderland, Colin has opens it and enters. He goes back in time several times and sees many historic events, but soon realises only the dying can see him. On one journey he rescues a French admiral and changes the course of history. While many events remain the same the monarchy ends, America has been divided into two nations and France has become the most powerful on Earth. Colin returns to discover his parents are alive and he is married to someone else with whom he has two children, a mortgage and a different career. As he comes to terms with his new life events take a turn for the worse.

I had hoped to take it to the Festival of Writing the attempt to secure an agent but with the Corona Virus putting the country in lockdown I doubt that this will take place.Also during this period I have taken to painting abstracts  with oils. The goal is to get a painting accepted by the Royal Academy for their Summer Exhibition. Two submissions have been rejected including this one “Tennessee 1863” It hangs in my study. 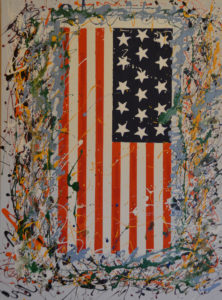 This site uses Akismet to reduce spam. Learn how your comment data is processed.

Official photograph was taken by Stuart Franklin, former President of Magnum Photos, and world renown for his photograph of the “Tank Man in Tianamen Square”, which has been listed in the top forty of the most powerful photographs ever taken. He is a friend and fellow Leonard Cohen fan. His work can be seen at www.stuartfranklin.com